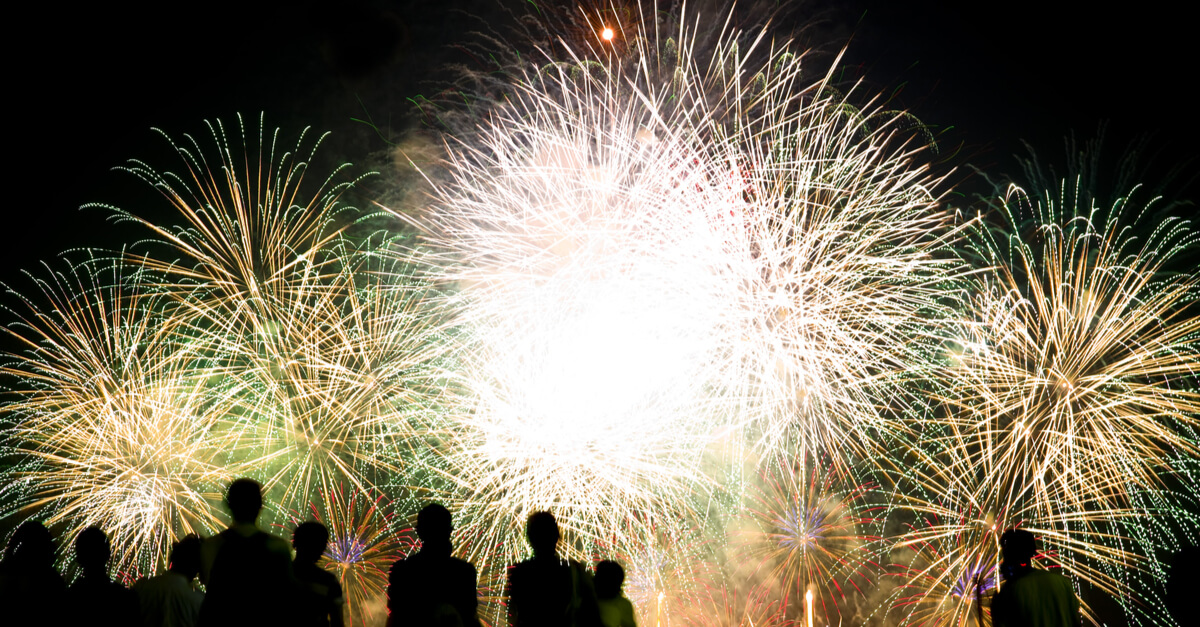 At approximately 15:00 (UTC) on December 16th, 2020, Bitcoin (BTC) surpassed the historic $20,000 mark. Crypto-Twitter was quick to pick up on the milestone as Bitcoin quickly rose to become one of the top trending topics. Trading was briefly interrupted on several exchanges, with Coinbase and Binance, two of the largest exchanges in the world, suffering outages during a period of intense activity, Xcoins remained online serving our customers throughout.

The news quickly spread to mainstream news outlets as CNN’s Alison Kosik interrupted an interview with former White House Director of Communications, Anthony Scaramucci, to ask what he thought the future had in-store for the number one cryptocurrency.

The milestone will have come as good news to anyone who entered the market after Bitcoin’s 2017 all-time-high of $19,783 and rode out the volatility through the three-years that followed. It was also good news for the hedge funds and financial institutions that have been building positions in Bitcoin since January.

How did we get here? This article will explore Bitcoin’s journey to its current value. We will look at the role institutional investors have played in getting us to this point as well as consider what could happen in the near future now that this historic milestone has been reached. But first, let’s take an in-depth look at the moment itself. 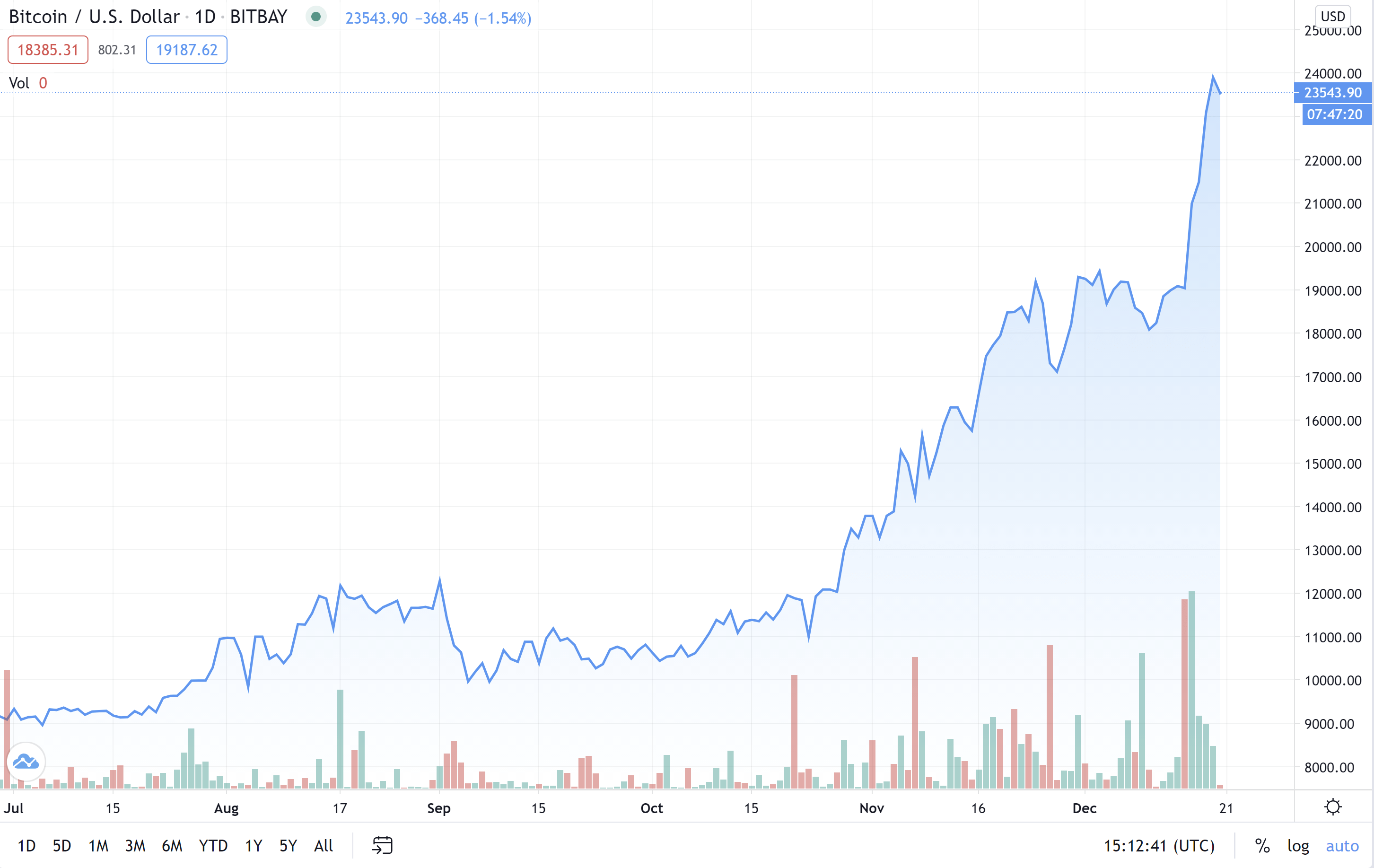 The push to break $20,000 is the culmination of a three-year journey that started at the end of 2017 when Bitcoin set a previous all-time-high at $19,798.68. Back then, the Chicago Mercantile Exchange (CME) had just launched the first-ever institutional Bitcoin futures markets, which fuelled speculation that big money would follow. The euphoria had mainstream media and analysts in disbelief.

The following three years saw one of the most unrelenting bear markets in the asset’s history. Most altcoins lost 90% of their value, Bitcoin fell back to $3000.

Then at the beginning of 2020, signs of a reversal started to appear. In the first quarter of the year, Bitcoin’s 24-hour trading volume started to increase, beyond levels seen towards the end of 2017. At the same time, the net-flow of Bitcoin into exchanges (an indicator of the preparedness of hodlers to sell) started to become increasingly negative, a sign that the Bitcoin being purchased was destined for long-term storage. This happened as Bitcoin’s price rose over 600% from $3,000 to $19,000, teasing, and eventually breaking through $20,000 after weeks of volatility.

Bitcoin analysts have been noticing several factors throughout the year that made this year different from 2017. The number of so-called ‘whales’ (Bitcoin wallets holding more than 1,000 BTC) had been multiplying significantly. Unlike in 2017, this rally wasn’t the result of retail speculation, but larger hands that are now seeing Bitcoin as a suitable hedge; institutional investors.

A tale of institutional Interest 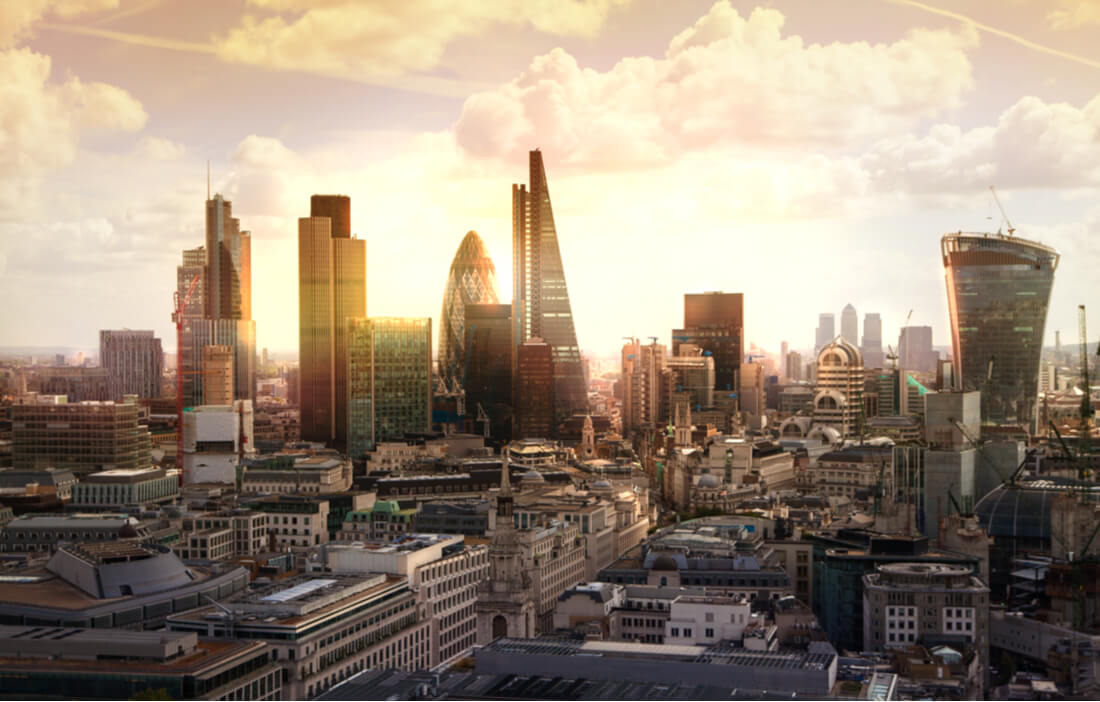 Institutional investors taking an interest in the crypto-world isn’t a new phenomenon. In 2017, a number of large commercial banks such as JP Morgan and Barclays floated the idea of setting up cryptocurrency trading desks, several payment processing giants such as Circle and MoneyGram made enormous investments in blockchain technology, and the largest exchange in the world, the Chicago Mercantile Exchange, even launched the first institutionally backed Bitcoin derivative, which was lauded as the catalyst for Bitcoin’s 2017 high. The difference this time, however, is that there has been a shift towards institutional investors investing their own funds into Bitcoin directly.

Then we have Grayscale Investments. Grayscale has positioned itself as the entry point for traditional investors with an interest in investing in cryptocurrencies but without the desire to handle their crypto themselves. Its flagship product, an Exchange-Traded Fund (ETF) named Grayscale Bitcoin Trust, which allows large investors to indirectly invest in Bitcoin without having to deal with custody, has over $10.8 billion under management, the majority of which has been added this year.

Only days ago, as Bitcoin surpassed $20,000, business analytics firm MicroStrategy announced it had been secretly building up a position in Bitcoin worth over $425 million. Moreover, it has recently raised a further $650 million which it says will be 100% committing to Bitcoin. It is without doubt that the current global economic situation resulting from the COVID-19 pandemic has played a role in these decisions, as large investors seek to use Bitcoin to hedge against underperforming traditional assets, contributing to the rally.

Now that Bitcoin is trading over $20,000, the true answer is simple. Nobody knows. This is unchartered territory and Bitcoin has already run a further 20% immediately after breaking the long-awaited $20,000 mark.

It is evident that Bitcoin’s famous volatility has returned with a vengeance.  We’re now in a new phase of price discovery as traders and investors look to reassess Bitcoin’s value. Institutional interest will probably continue to grow as the pandemic continues to batter economies all around the globe. With that, the growing attention of the mainstream media and the general public will be drawn which tends to be followed by an increase in trading activity. It is possible that the altcoin market could see gains similar to that in 2017 and maybe, just maybe, the post-$19,783 alt-season will be repeated.

It’s not all good news

There are some factors that may hinder this bullish trajectory in the near-term. The infamous collapsed exchange, Mt Gox., is due to release over $2.6 billion worth of Bitcoin to users who were deprived of their funds following the 2014 hack. A lot of those users will see an enormous windfall and some may cash out immediately which could cause a temporary dip in the price. On the other hand, if you’re waiting for your moment to enter the market this could be a very smart entry point.

Moreover, United States lawmakers have proposed regulations that could require US cryptocurrency businesses, such as exchanges, to apply for a banking license and carry out extra Know-Your-Customer and Anti Money-Laundering checks for users that want to withdraw their cryptocurrencies to their own wallets. If you hold your cryptocurrency on an exchange you would be well advised to research the implications of these proposed laws.

As we saw in 2017 with the ‘China Ban’ and then later with New York’s BitLicense, the cryptocurrency space has been adept at evolving with regulation and growing stronger in the process.

Whether we’ll see the same positive growth over the next three years, only time can tell, but here at Xcoins, we are cautiously optimistic. Whatever happens next, we’ll be right here with you keeping you informed, offering uninterrupted instant crypto transactions and 24/7 support every step of the way.