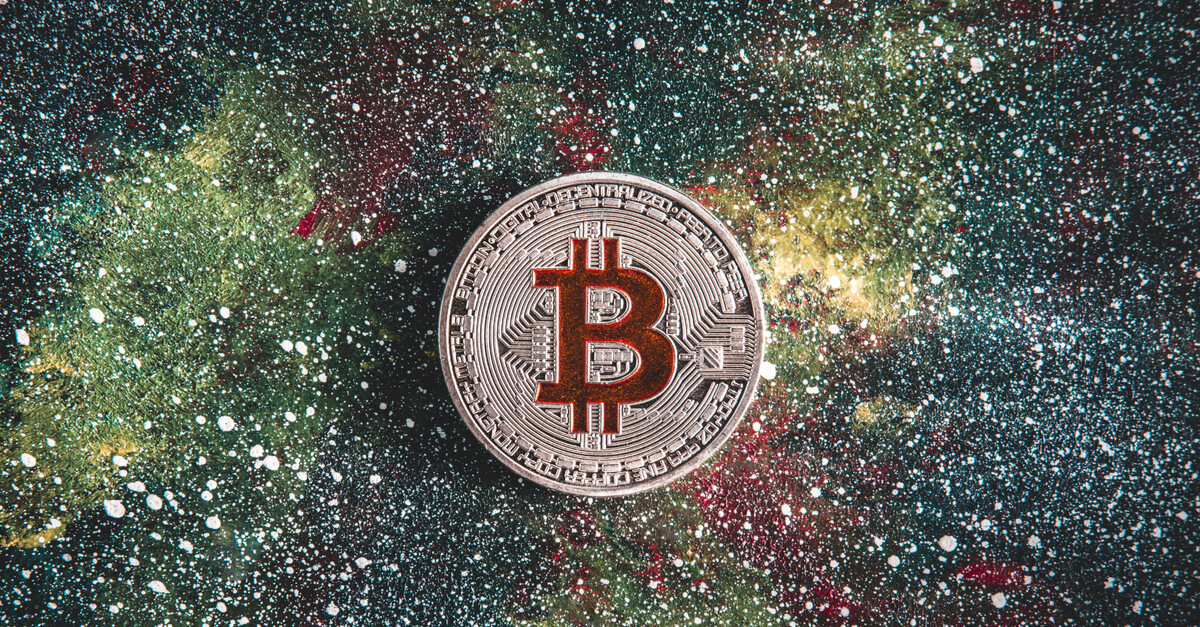 $1,000,000 per Bitcoin. Yes, you read that right. With new all-time highs being created on what seems to be a daily basis, price predictions for Bitcoin are spiraling to ever-increasing heights. We dig into the numbers that the biggest names in the business are projecting.

Many doubted it was possible, yet here we are

This news may have piqued your interest and perhaps now you are finally considering it as an investment opportunity. Afterall, many believed that a $20,000 Bitcoin was completely crazy, and yet we have just witnessed $30,000 and $40,000 in quick succession.

With 10% daily increases appearing to be increasingly common occurrences in this market it may leave you assuming that Bitcoin as an investment is a ‘no-brainer’. You could be right. But there is certainly more to consider and you should be prepared for the fact that these price moves can travel in both directions.

Bitcoin experienced a 300% annual price increase in 2020, closing at $29,000 per coin on December 31st. Returns such as these are only seen occasionally in the financial markets and usually over much longer periods of time, but in the history of Bitcoin, they are far from exceptional.

With growing interest in cryptocurrency markets, future price predictions for Bitcoin are now ranging anywhere from $100,000 up to $1 million per coin. A million dollar price target within five years has been set by former Goldman Sachs hedge-fund chief Raoul Pal who has allocated more than 50% of his capital to bitcoin. Pal isn’t alone with his expectations, Jason Williams, a partner at a digital asset investment fund Morgan Creek Digital is even more bullish, expecting BTC to "hit $1-3 million in the next five years".

The veteran fund manager Cathie Wood, who heads up the future-focused rocket ship Ark Invest recently set out a well-reasoned case for how institutional allocations of 6.5% could drive the Bitcoin price upwards by $500,000. 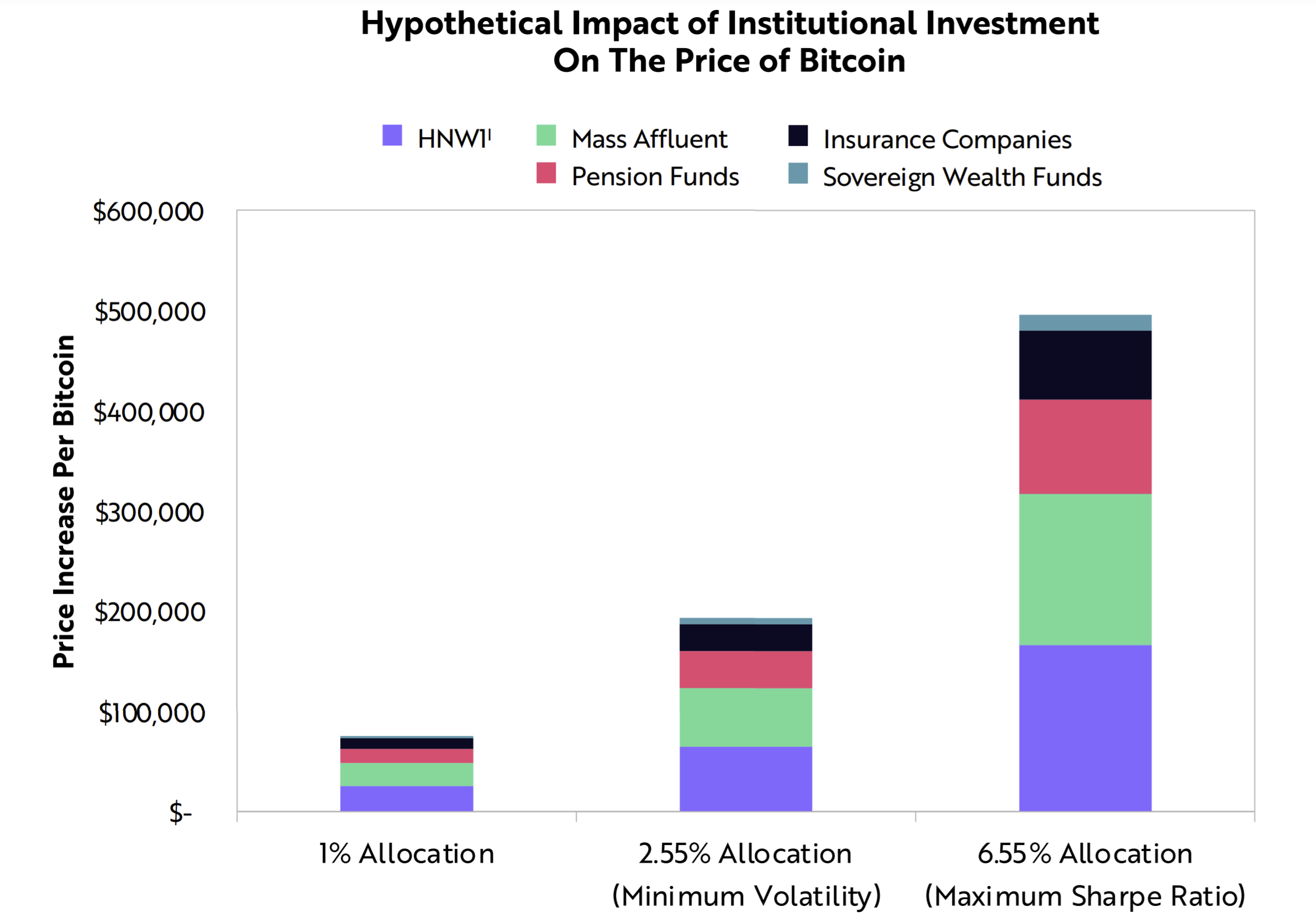 This estimation doesn’t include the impact of purchases by companies such as Tesla that this week bought $1.5 billion dollars of bitcoin.

According to the Ark analysis, if bitcoin were to replace a fraction of the cash held on S&P 500 corporate balance sheets, the price of a single bitcoin could rise by $400,000. 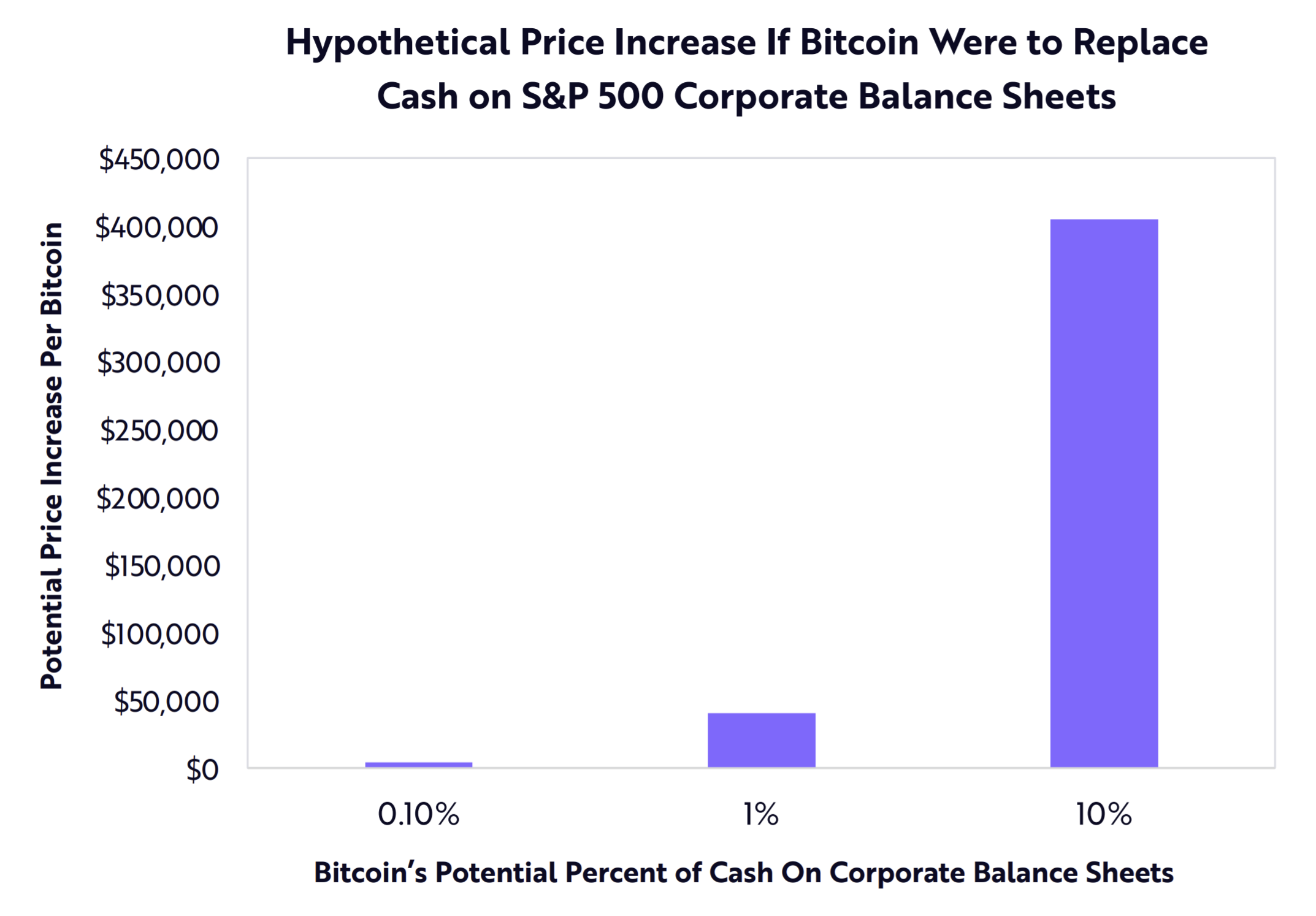 Two sides to every coin 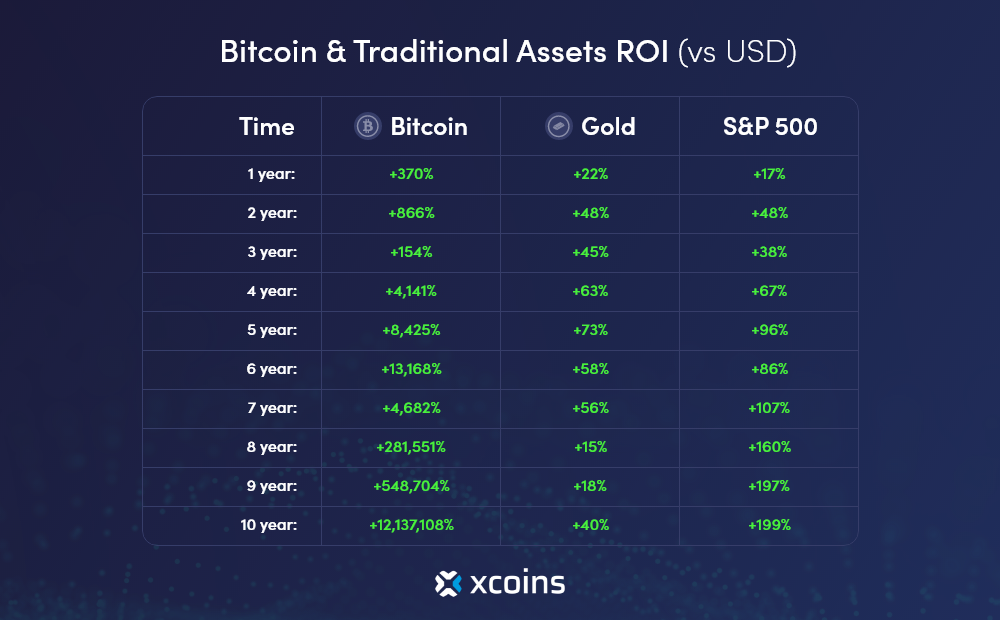 Many cryptocurrency enthusiasts believe that during 2020, or possibly earlier in 2019, Bitcoin entered another, even more significant bullish cycle. If we allow ourselves to consider past performance, this is clearly encouraging for the near-term price potential. Could we see similar percentage increases? Of course. However, it is not just the upside a smart investor should have their eye on. Sooner or later the Bitcoin price may drop once again, and you need to be prepared for it if it happens.

After the 2017 bull run, the Bitcoin price subsequently entered a bearish cycle, which caused prices to fall back to $3000 per coin. 83% of Bitcoin’s value was wiped clean. Could the same happen to the Bitcoin price tomorrow? Absolutely.

So the question you need to ask yourself is are you willing to accept the financial hit to hold through those bad times? The question no one will be able to predict is if and when it happens.

Undoubtedly, the price increases Bitcoin is seeing do make for an attractive investment opportunity. But you must remember, what goes up can come down.

Historical price data has shown us that Bitcoin’s price can plummet just as quickly as it rockets, making it one of the most volatile assets in the world. If you are ready to handle the heat, you could be greatly rewarded.

Be prepared for cyclical price movement

Many believe that looking at the price movement patterns following Bitcoin’s cyclical halvings can offer an interesting window into the future.

Taking this approach suggests we may see Bitcoin well over $300,000 in the current cycle, according to one recent analysis. 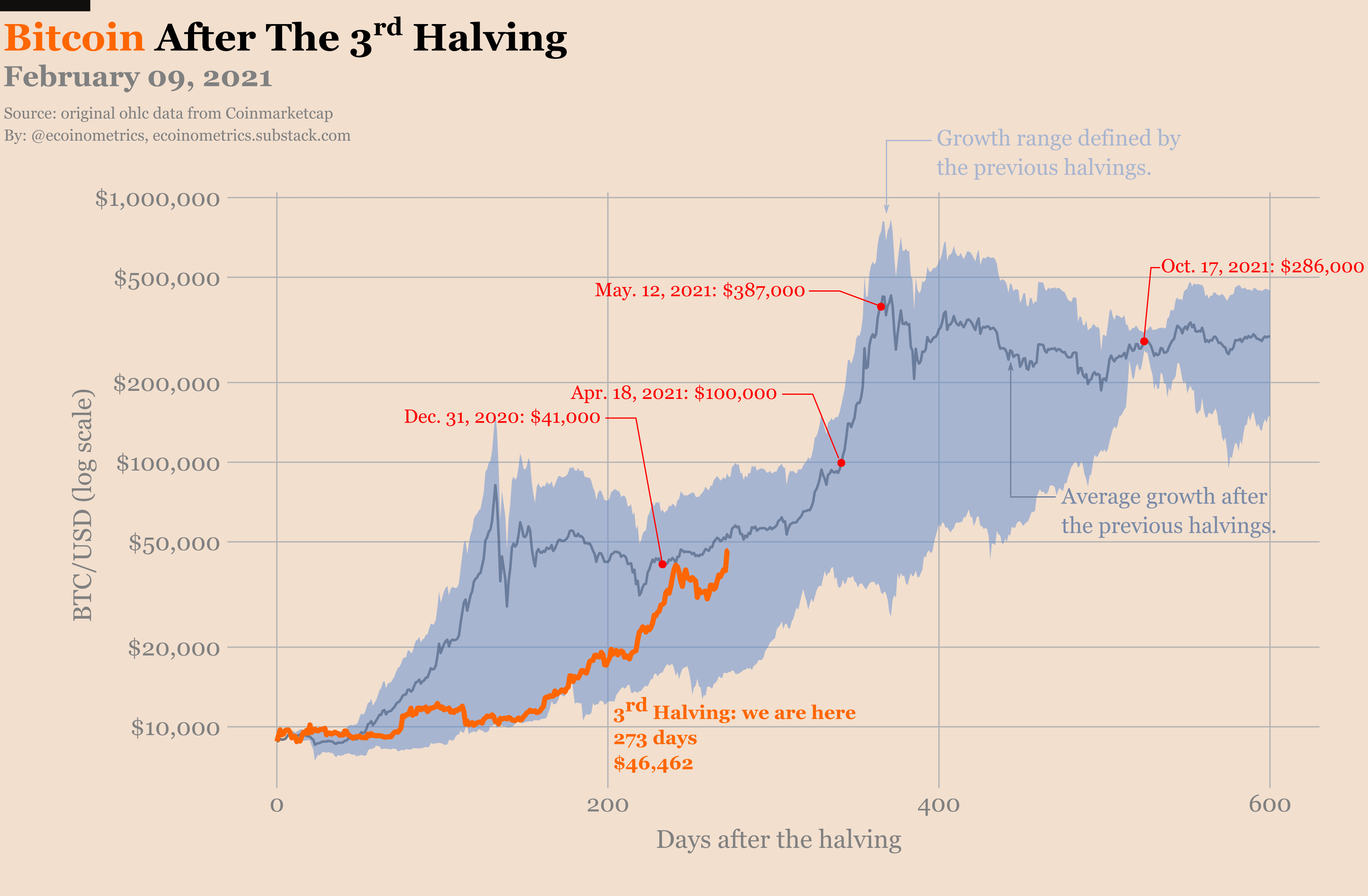 Once again, by all means read these theories, but remember they are just that. Theories. In reality, the Bitcoin price could go almost anywhere. it is crucial to remember that no one can ever accurately predict where the price of any financial asset will go. Every investment comes with associated risk, and Bitcoin is no exception. The only thing smart investors can do is use current data to inform investment decisions.

There will only ever be 21 million bitcoin in existence, as the supply up to that point is fundamentally limited by its design. If we compare other commodities, such as gold or oil, when the supply becomes limited, prices usually rise. But unlike gold, Bitcoin’s supply has a hard limit. 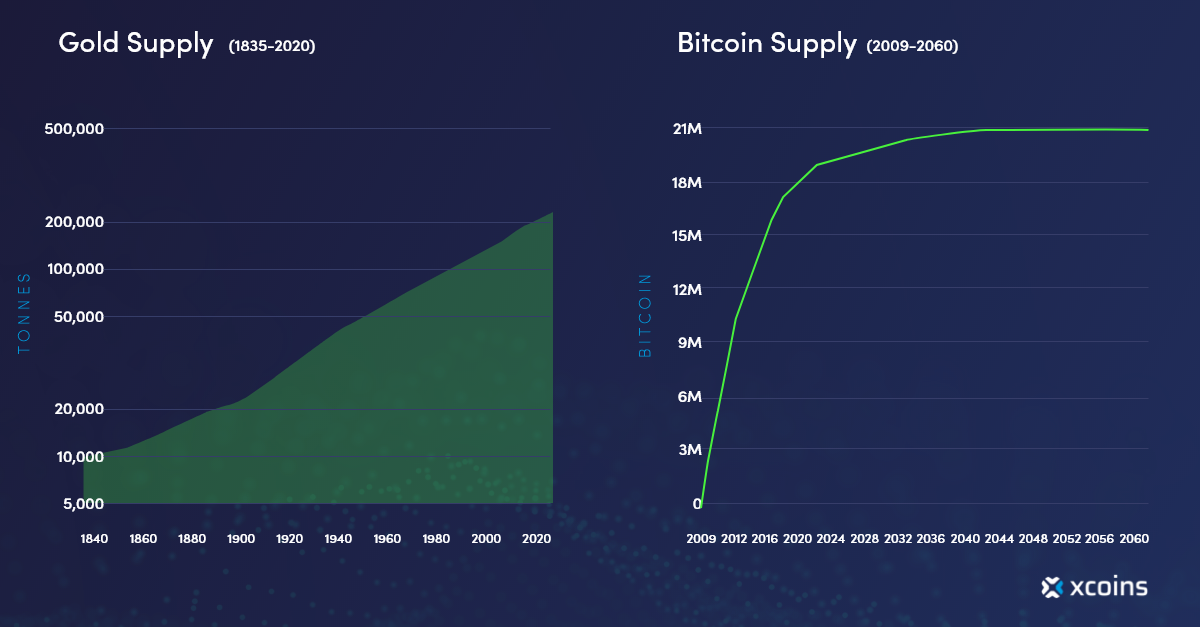 During the last bullish cycle, the bitcoin price was driven upwards by early innovators; those that believed Bitcoin, and the blockchain technology behind it held tremendous value for the future. These early pioneers were greatly rewarded in 2017.

Institutions such as investment funds and multinational corporations missed out on the parabolic climb due to skepticism regarding Bitcoin’s potential as a feasible payment system. They were left scratching their heads in bewilderment.

However, since then, the same organisations that once slated Bitcoin have changed their stance en masse. Investment banks, such as JP Morgan and Goldman Sachs, now include Bitcoin within their portfolios. JP Morgan even recently published an investor note suggesting that Bitcoin could reach prices as high as $100,000 in 2021 alone.

With corporations, such as Paypal now investing heavily in technology for the processing of cryptocurrency payments, these predictions appear ever more likely. Note that many companies such as Paypal currently don’t allow you to be in control of your own cryptocurrency, so while they are bringing newcomers to the market in droves and therefore driving up the Bitcoin price, we certainly wouldn’t recommend using them.

Institutional wealth far outweighs that of the common retail investor however, which is why, here in 2021, tremendous moves are now beginning to be felt and could continue throughout the year. The more institutions that push towards global cryptocurrency adoption, the greater the chance that Bitcoin will stabilize at higher and higher prices.

Even with the moves seen recently, a $1 million Bitcoin is still hard to fathom, particularly for anyone who remembers the early days. That said, it is certainly possible. With only 21 million Bitcoin in supply and the demand for Bitcoin ever-growing, a price target of $1M has never seemed more likely. But there is certainly a long way to go before then.

The key to unlocking greater returns

Like with any investment, you need to do your own research. Before investing a cent into Bitcoin we would advise you to educate yourself on what you are purchasing rather than trusting the euphoria of higher and higher price movements.

Can you explain what Bitcoin (and blockchain, the technology underlying it) is to your friends and why it may grow further in the future? If you understand the fundamentals and can say yes to the above, then you are setting yourself up for far greater returns, as you’ll be in a better position to “HODL” through the next dip if and when it occurs.

Once you are ready to take the plunge, make sure to use a trusted cryptocurrency exchange such as Xcoins which aims to make the process of buying Bitcoin as simple and efficient as possible and offers 24/7 customer support to help you make sure you make no mistakes.

The cryptocurrency industry is still in its infancy, so it is incredibly important to educate yourself and beware of scams and avoid making simple mistakes.

Once you purchase your Bitcoin, make sure you store it safely in a wallet you have full control over, if you lose your private keys, the secret code needed to access your cryptocurrency, it is lost forever, but storing it safely isn’t hard.

The Bitcoin price is now sailing in uncharted waters without a compass. No one can accurately predict where the next all-time-high price for Bitcoin will lie but what we can be increasingly sure of is that one way or another, Bitcoin is here to stay.