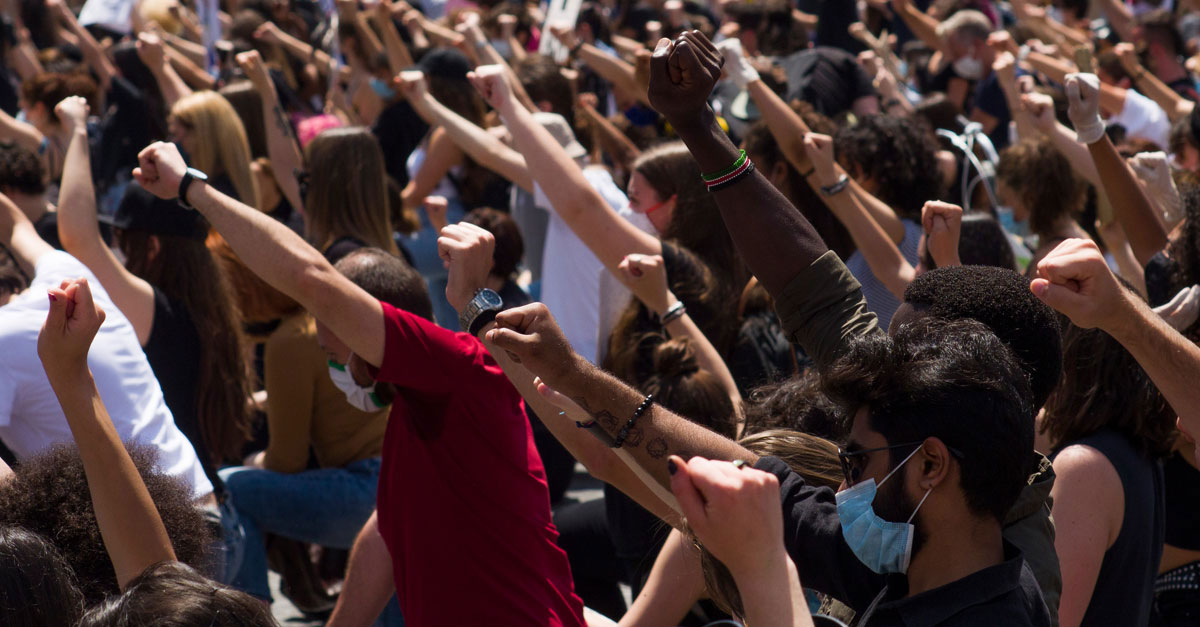 One disruptor on its own rarely rattles global cages. But what happens when four come at once? Does anybody believe that the Chinese have not already gamed out the international reaction to their recent moves on Hong Kong’s independence? Reviewing the medium-term outlook, we ask how this will affect the “exorbitant privilege” of the U.S. Dollar. All of this and a new appointment in the EU gives us pause for thought. 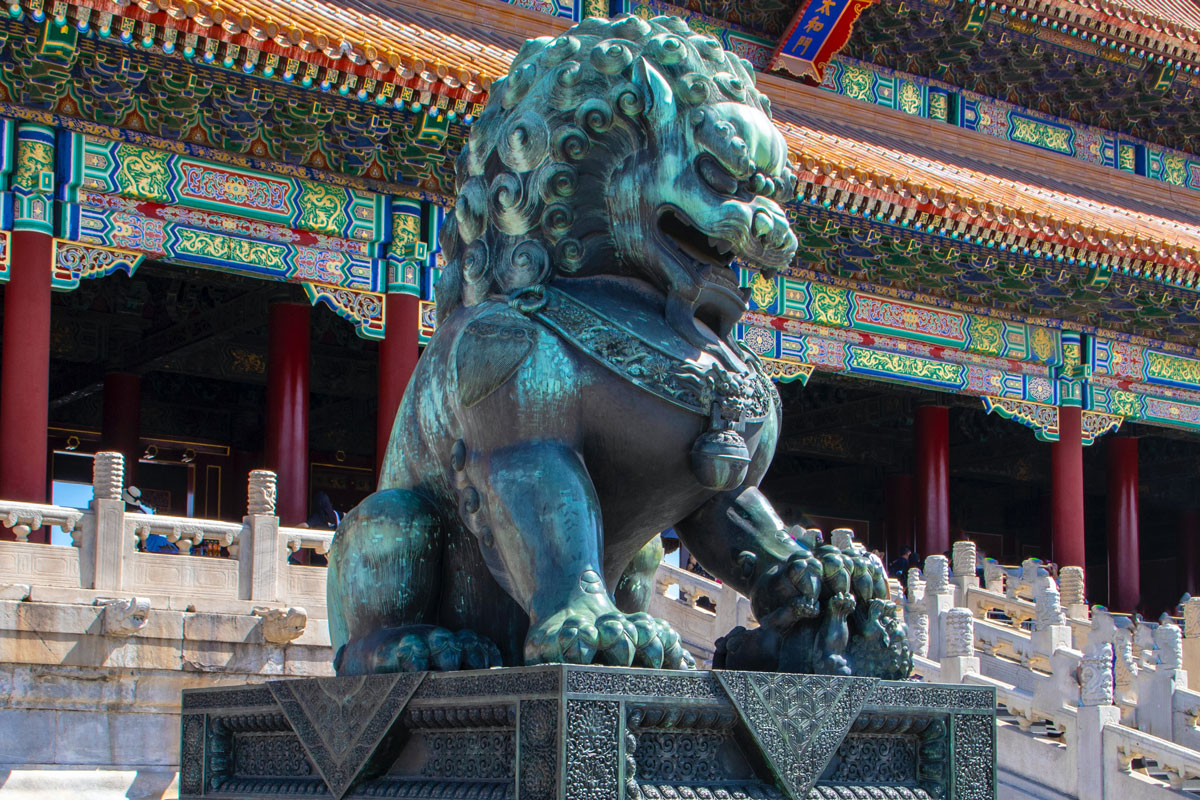 We recently reported on the initial effects of the new security law passed by China in the territory of Hong Kong. The U.S. has responded by removing Hong Kong's special status but it could have gone a lot further. In particular, whilst not directly under U.S. control, it could have also attacked the symbiotic relationship between the U.S. and the Hong Kong Dollar (HKD) that has been used as a linchpin for commercial activity in Asia for much of that last 50 years. So why didn’t they?

A move decoupling the HKD would not just have damaged local interests but also the massive amount of U.S. and global business that flows through the territory. It could also have sparked a more intense trade war.

But our question this week is more fundamental. Why did the Chinese decide to go ahead with this now? We have been following the Chinese reactions to the U.S. response, and particularly to the U.K.’s offer of citizenship to H.K. residents. A country that doesn’t do democracy has plenty of time for longer-term planning, and we suspect the Chinese were anxious to get their move on H.K. completed ahead of the next U.S. election. This would give them the opportunity to reset things if the blowback was more than they had planned for. Additionally, we think China will target the UK as a proxy war rather than going directly at the U.S. With Brexit looming, the Chinese will be able to road test certain actions for future use elsewhere if they are not challenged to a degree that is outside their expectations.

For us, this all adds up to a new era for the USD. We have made it clear in recent articles that we don’t expect the USD to lose its reserve currency status any time soon, but we do envisage its exorbitant privilege getting bruised as China expands its global influence.

The exorbitant privilege of the USD

Listening to a recent conversation on modern monetary theory (MMT), all the rage at the moment due to its supposed cure-all for unemployment, we were interested in the developing argument about the power of the USD globally.

To put it in simple terms, would you prefer U.S. or Freedonia Dollars next time you are selling something? In all likelihood, you would not choose the Marx brothers’ hypothetical national currency. This gives the U.S. an enormous advantage as not only is it widely accepted, but they can print as much of it as they like. This is a privilege that has been expertly exploited in the past but may now be under some pressure.

Now there are more options. If the E.U. doesn’t implode, the EUR will continue to be accepted as a reliable safe-haven currency, in quiet times. The Japanese Yen (JPY) will be in even more favor as the HKD loses its sheen. Cryptocurrency will continue to gain prominence in investment portfolios as a less politically influenced asset than all the others combined. 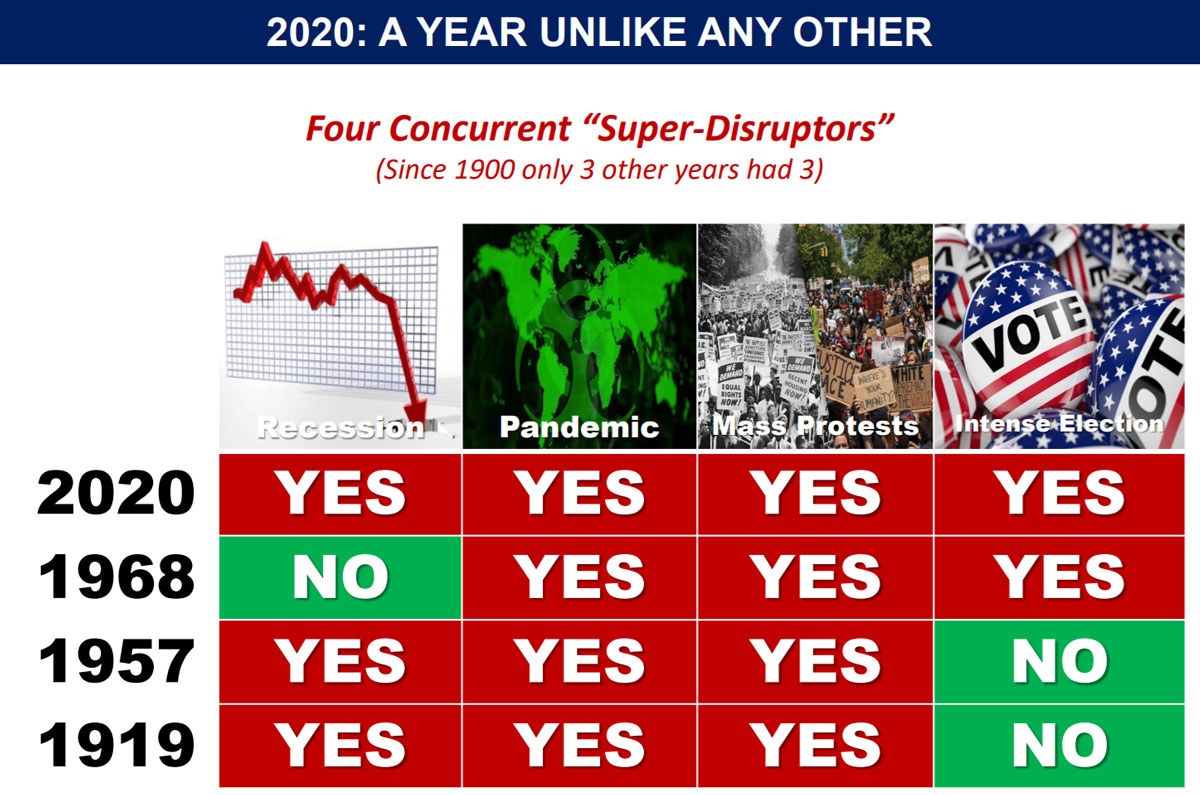 2020 is the first year to tick all four boxes in over 100 years. Image by Bruce Mehlman.

The American political commentator, Bruce Mehlman, tweeted the above chart this week from his analysis detailing four concurrent super-disruptors and their status since 1900. 2020 is the first year to tick all the boxes with only three other years recording more than two events.

They say history doesn’t repeat but it does rhyme. If 1968 is any guide, we are in for a rough ride. For those who need a reminder, both Martin Luther King and Robert Kennedy were assassinated, Prague and Paris were in revolt and the Chicago Democratic Convention was overrun by protestors. For more on the pandemic of that year, you can listen to the “This Day In Esoteric Political History - The pandemic we forget”.

If we look at the upheaval of the 1970s with its oil shortages, strikes, recession, and of course the rise of the sex pistols, we may not have a lot to look forward to in the decade ahead if this comparison has any validity. This period really copper-fastened the USD as a safe-haven currency. One may have to look elsewhere in the coming years for a similar value-protecting asset.

The Eurogroup, the committee of European finance ministers, elected a new president last week and this time the honor went to the Irish Finance Minister, Paschal Donohoe. His brief will be to help guide the Bloc through its worst-ever recession and ensure the EU comes out the other side more, rather than less unified than going in.

The reason this is important is that, as a win for the smaller EU countries, the markets may now expect a more collaborative approach to debt issuance. This may weaken the Euro if not handled properly.

Regardless, and he will be cognizant of how Ireland was treated (or mistreated depending on your view) by the EU during the 2008 crisis, we think he will not go too outside the box on fiscal responsibility. We would add that he may not have the financial imagination required for our times but shall wait and see before making any decisions.

Last week's UK GDP was lower than hoped for while the U.S. posted better than expected retail sales, still weaker than the previous month, however. We may go back to ignoring all of these numbers again if the shutdowns are reintroduced and spikes continue. We will keep you posted.

The author works exclusively for Xcoins.com and has spent almost 20 years in trading rooms from New York & London to Düsseldorf & Sydney.