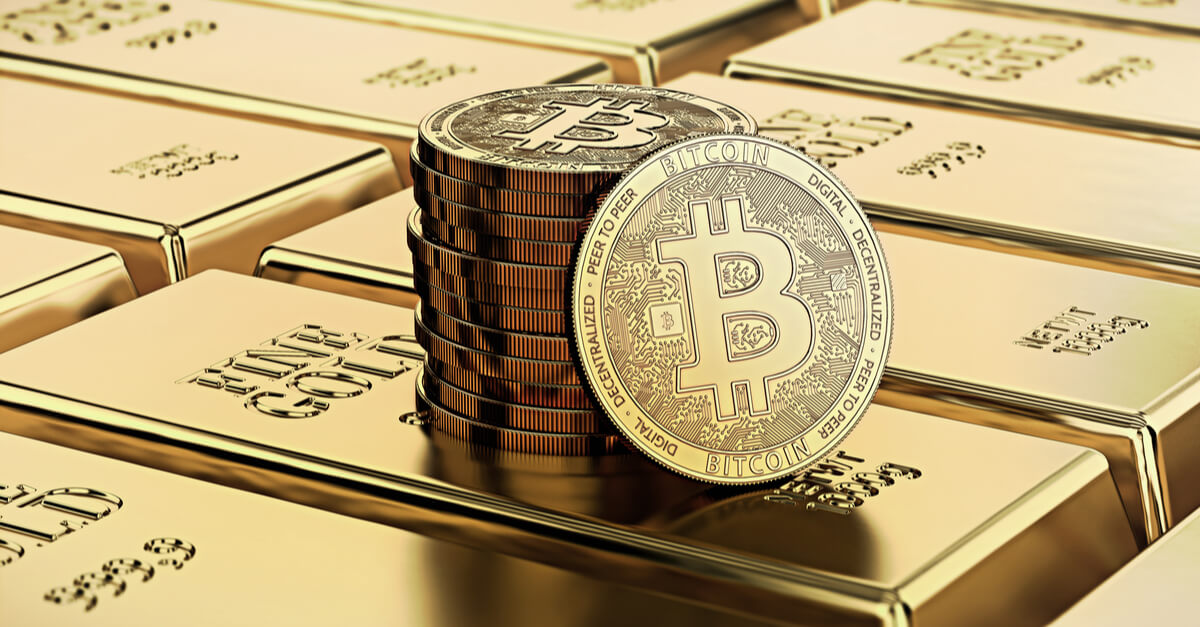 As more and more evidence mounts for the fundamentals underlying Bitcoin, increasingly gold bugs are flipping to Bitcoin.

A lot of buzz has been surrounding a tweet made by MicroStrategy’s Founder, Chairman & CEO Michael Saylor in which he stated that “When the Bitcoin Dragon emerges from its lair, the first thing it will eat is the Kingdom of Gold.”

This tweet expresses the stance that Bitcoin will end up taking Gold’s market share instead of peaceful coexistence. It was tweeted in agreement with the views presented by the famous crypto bull Anthony Pompliano in his daily newsletter with the subject title “Gold vs Bitcoin Doesn't End In Co-existence”.

In his newsletter, Pompliano started by saying that Bitcoin is often called “digital gold” which places these assets in the same basket, but this is a flawed conclusion. He shared the following chart from J.P. Morgan in which we can see that Grayscale’s Bitcoin holdings alone are higher than the total known ETF holdings of Gold. 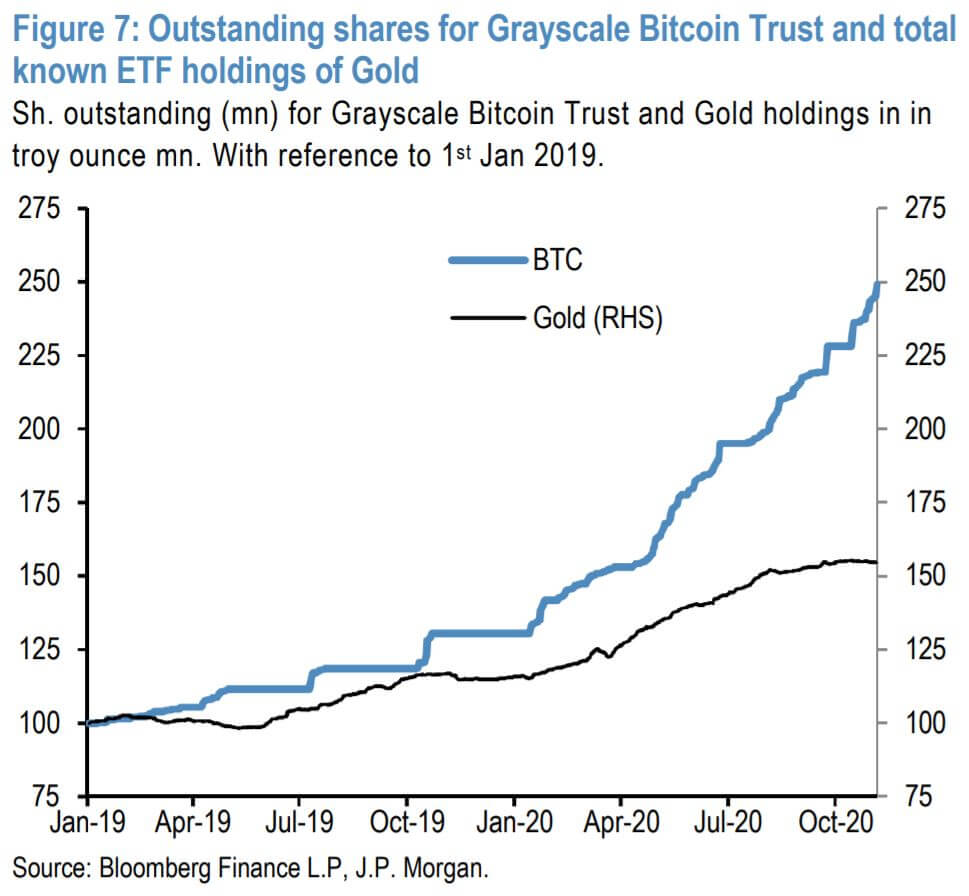 This trend is expected to increase with increasing adoption and demand for cryptocurrencies from institutional investors. We can conclude that the chart presented by J.P Morgan is only a partial picture of the lead Bitcoin is taking over Gold - the portion of the iceberg that is visible.

So the question follows: Why are institutions increasing their holding activity in Bitcoin and not in Gold? This especially matters for traditional investment vehicles like Trusts and ETFs which hold underlying assets for their investors for the ease of investment.

Will Bitcoin and Gold Coexist? 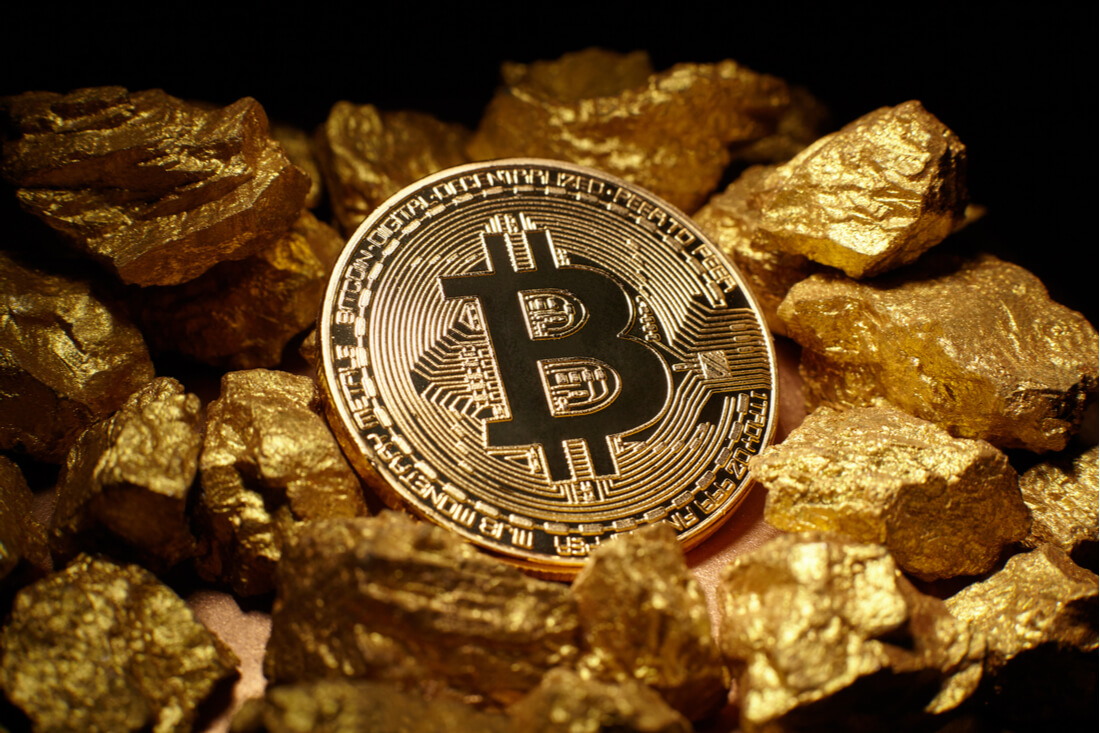 Both Bitcoin and Gold are viewed as a store of value, and even though Bitcoin is a blip in Gold’s history it seems to attract more and more interest from institutional investors and hedge fund managers. In the midst of the 2020 turmoil and the vast uncertainty, many hedge fund managers have gone out in public saying that a good hedge against the current situation is holding gold and cryptocurrencies. Those include Mike Novogratz, Raul Pa, Ray Dalio. How are they allocating funds? We can take a hint from Stanley Druckenmiller’s recent interview for CNBC.

Stanley made headlines in the crypto space by saying that: “If the gold bet works, the bitcoin bet will probably work better.” He admitted that he definitely owns more gold than Bitcoin at the moment, but thinks that Bitcoin can outperform Gold in the long run because “it’s thinner, more illiquid and has a lot more beta to it.”

Stanley might just be the perfect embodiment of Michael Saylor statement because he comes from the traditional hedge fund industry and has proven his success in navigating the markets. Having said that he didn’t want to buy Bitcoin in 2018, he admitted that he is a “dinosaur” but he “warmed up” to the idea that Bitcoin could be a better investment as it had 13 years to prove its case as a store of value and might attract millennial and “west coast money”.

Why can’t Bitcoin and Gold co-exist?

So why can’t Bitcoin and Gold co-exist? Well, they most likely will. Bitcoin won't abolish gold and gold won't make Bitcoin obsolete. But when it comes to investing in these assets, they attract a similar investment thesis - a contrarian one to the current monetary system. Gold bugs have traditionally been the sort of investors who believed in hard money and Austrian economics and have been very critical toward central banking.

Exactly the same qualities have been embedded in Bitcoin as in Gold, but with some saying that Bitcoin is even more finite then Gold as it truly has a finite supply. Similar investors' mindsets are in play for both assets, so this is why it is expected that Bitcoin will eventually take more of Gold’s market share over time due to its various benefits. With Bitcoin, you are your own custodian of your funds and this can be the single most important selling point, as Gold usually takes third party security and vault providers to store. Furthermore, as Druckenmiller points out, it is "thinner", meaning it's easier to divide and spend. Bitcoin can easily be divided and spent in tiny units known as Satoshis, while dividing a gold bar into coins to spend isn't exactly practical or convenient.

In addition to newcomers entering the space and increasing adoption of crypto in general, it is easy to see why Bitcoin is a better bet than gold in the future to come.